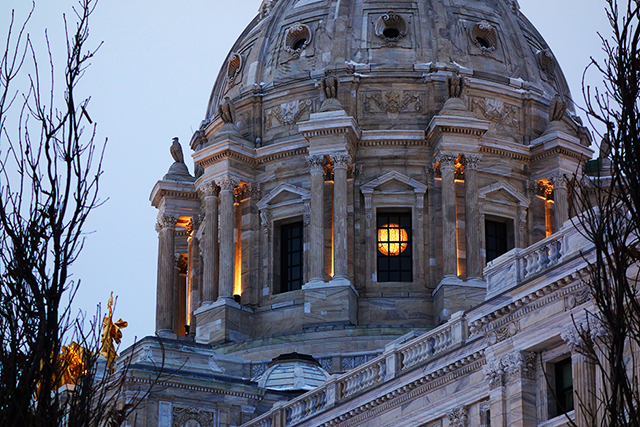 Joe Nelson “Bring Me the News” with the latest on Winter storm situation: “Snow moved into Minnesota on Wednesday morning and will move east and accumulate heavily in parts of central and eastern Minnesota before attention turns to strong winds and white spots Thursday and Friday,” Nelson writes.

Bring Me the News staff report a The family of a Chisago County sheriff’s deputy lost everything, including three dogs, in a fire this week. One of the dogs was Deputy K9 for the Kiro department.

Report by Paul Walsh and Kailand Jackson of The Strib that Hennepin County Attorney Mike Freeman says the Minneapolis officers were acquitted under Minnesota law deadly shooting 20 year old Andrew Tekle Sandberg during the standoff in July and will not press charges against the officers. Sandberg’s mother says the family is heartbroken.

Adam Daxter of WCCO TV reports that the Minneapolis Indian Affairs Division has given out food baskets dedicated to Indigenous dishes. – from bison to pike perch – to indigenous elders.

Melody Hoffmann of Southwest Voices reports. in The Minnesota Department of Transportation has cleared a camp at 35W at 31st Street West. “They came early,” said the camper, standing among the piles of things. The resident of the camp said that the announced time to clear the camp was 9 am, but they showed up at 7 am,” Hoffmann says.

Sahan magazine reports Regina Medina and Kerem Yusel. what The Mall of America in Santa Claus expanded its concept of Santa Claus. to include more ethnic groups and languages.

This is reported by Mark Zdechlik from MPR. parents of young children having trouble finding over-the-counter medicines for children amid the surge in influenza, RSV and COVID-19.

Reported by Mike Hewlett of The Strib. Google it cancels its plans to build a $600 million data center in Becker.

And from ESPN Ahmad Rashad and Peyton Manning recreate the Minnesota Viking Miracle in the mall of America.