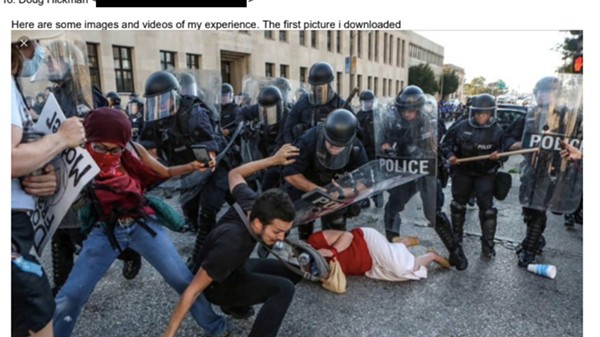 An email from Laura Jones to her brother containing a photo of Lawrence Bryant for St. Louis American, was admitted to evidence in court.

In federal court yesterday, prosecutors representing the city of St. Louis questioned the motives of a 68-year-old woman, alleging police used excessive force on her during a 2017 protest.

The civil lawsuit filed by Laura Jones focuses on what she says was officer misconduct on September 15, 2017. On that day, former police officer Jason Stockley was acquitted of murder charges related to the murder of 24-year-old Anthony Lamar Smith. The verdict sent hundreds of protesters onto the streets, including Jones.

In her costume, Jones says she was “rammed by a police shield and thrown to the ground” at Clark and Tucker avenues. Soon after, she was placed under arrest. Jones is suing for $177,600.

Under cross-examination of Jones this morning, Deputy City Councilor Abby Duncan asked her if the money motivated her to file this lawsuit. Jones was sure it wasn’t.

But then Duncan drew attention to Jones’ medical record from the University of Michigan Hospital, in which Jones allegedly said during a psychological evaluation that she would kill herself when her child support ran out when she turned 70. Jones allegedly pointed out that she used to be rich and couldn’t imagine life at a lower station.

Duncan also cited an email sent by Jones in January 2019 in which she said she “hopes” for compensation when her child support ends in 2024.

When questioned by her own lawyer, Alicia Campbell, Jones stated that the suicide comments were made during an episode of mental distress about which she was seeking help.

As for the email, Jones previously testified that in emails and text messages to friends and family following her arrest, she minimized the incident, saying she wanted to reassure worried family and friends who lived out of state.

On her first day on the podium yesterday, Jones described her decision to go to the protest as seemingly spur of the moment, saying her faith makes her “pray with her feet” in the face of injustice.

She said that on September 15, 2017, she heard the news on the radio that Stokely was acquitted after a week of substitute training. Jones testified that she was not familiar with the city center and did not even know where she parked. She was at Clark and Tucker’s by early evening, her arms raised and folded into two peace signs, as a line of shield-wielding cops ordered her to back off.

The question of whether Jones heard these commands has been a key point of contention over the past two days. The issue has come to the fore because Jones says she was beaten during her arrest for “interfering” with the police.

On Tuesday, while being questioned by her own lawyer, Jones said she couldn’t understand what the police were saying over the megaphone, comparing what she heard to a garbled announcement at the bus station.

Jones testified that she has cousins ​​who work for the Michigan police force, including one who was a small town police chief, and that she is proud of their service. At the booth, she said she had participated in the January 2017 Women’s March as well as a demonstration in support of the Affordable Care Act, but she had never participated in anything like the Stokeley protests before. She said that when people threw stones at the police, she yelled at them to stop doing it, as she believed the protest should be peaceful.

Jones testified that she had nightmares about it in the years since the incident, and something as simple as publicly nagging can trigger a flashback.

The final debate in the case begins at 10 am, and the jury is due to deliver a verdict today or tomorrow.