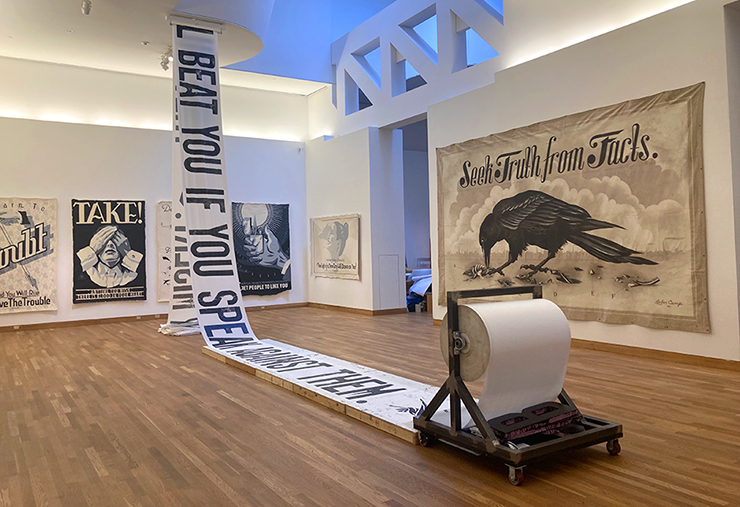 I don’t think anyone can say the pandemic is over, but it looks like a thaw has set in after the worst COVID winter in 2022. The art community in the Twin Cities and beyond has reflected on everything that has happened in the past nearly three years, making subtle and bold changes in leadership, direction and vision from time to time.

On the bolder end of the spectrum, Penumbra has made great strides in its transformation into a center for racial healing with a new leadership model that puts racial justice and well-being at the forefront. There have also been changes in many other organizations. Mixed Blood said goodbye to their founding artistic director Jack Royler as they handed over the reins Mark Valdes. Other notable changes included Jera Patrick becoming the Highpoint Printing Center. new executive directorand naming of the Historical Theater Richard D. Thompson as his new artistic director. Meanwhile, Vincenzo de Bellis left the Walker Art Center.moves to a new gig at Art Basel and Ginger Shulik Porcella leaves Franconia to become Executive Director of Creative Growth in Auckland.

The latter disappointed me very much, because I watched with interest the new initiatives of Franconia, especially the first ones. 4Earth A public art festival that took place throughout the region. Another event that caught my attention was the Children’s Museum of Minnesota. accessibility efforts.

This year there were fantastic exhibitions, performances and much more in the field of art. I briefly wrote about some here in MinnPost, such as Harriet Barth’s vibrant exhibition at the NewStudio Gallery:Pay“. The stunning sculptural installation “Tormented Objects” became the centerpiece of the exhibition. Bart knows how to imbue carefully selected materials (seeds, stone, steel, etc.) with deep meaning and create works that inspire awe.

The memorable theatrical production of 2022 was “Iphigenia in Aulispresented by the Ten Thousand Things Theatre. I watched the open-air performance by the Mississippi River and talked about how much I loved the musical part, thanks to the talent of JD Steele who wrote the music and Billy Steele’s live keyboards, plus an amazing chorus.

A few other highlights in art were “पौर्णिमा: Looking into the night of the full moon”, presented at Soo Visual Art, and “Sonya Peterson”.What did the trade winds bringat the Minnesota Maritime Art Museum. Another show not to be missed – it will be available for viewing until December 29 – is an overview of the career of Piotr Shigalsky.We work all the time“, at the Weisman Art Museum. Each of these three exhibitions was complex in content and created breathtaking, stunning images in the artists’ respective mediums.

Often for a one-time performance or event, I can only guess if it’s worth your time. I wrote a preview for Junauda Petrus-Nas’ Theory of Mass Extinction Impacts and took part in the work after my preview came out. It was one of the happiest things I’ve seen all year.

I also really enjoyed Kanese Schaal’s film.”CLII“, a delayed production at Walker that was part of the “Out There” series. Created in collaboration with Cornell Alston and Christopher Myers, the work was a compelling investigation into Leopold II’s brutality in the Belgian Congo. Kanese Shaal has tremendous power as a performer. One scene where she eats a large portion of meat for a long period of time while sitting on a high throne was sinister in the extreme.

I had so much fun at the 15th Latvian Song and Dance Festival when I got to see “Charmed by the Sea” performed by the Saulkrasti mixed choir ANIMA on Orduey. I loved too Interpol at the Palace Theatre, the Spectral Quartet at the Bell Museum, Living Traditions featuring The Wounded Knee Incident by Louis Ballard commissioned by SPCO at the Ordway Concert Hall, and a staged reading of Death of a Salesman. with Asian actors playing members of the Lohman family at the Conn Theatre.

One of my favorite things to do as an art journalist is to write about artists I admire, especially when they recently won an award. This year I profiled Ta-Kumba Aiken after he was named the 2022 Guggenheim Fellow of the Year, Douglas Ewart when he became the 2022 McKnight Honored Artist of the Year and Ifra Mansour and Saimukda Duangfuksai Wongsai when they became Bush Fellows. I also had the opportunity to interview Ellen Hartwho received the Lifetime Achievement Award at the World Mystery Convention this year.

2023 is full of promises of good things. I was lucky enough to see one of the first Pillsbury House + Theater offerings featuring Sharon Bridgefort, The Bull Jeans Experience, part of a series of programs that dive into Bridgeforth’s writing in the theatre. I am also looking forward to Pramila Vasudevan’s project with Public Art St. Paul Prairie/Concrete. Vasudevan shared a very personal piece last year in which she explored her own experience of living with serious illnesses and traumatic medical procedures/drugs. Both the exhibition at the Hair + Nails Gallery (with Rachel Jedrzejewski) and the performance at the Red Eye Theater opened a window into this exploration, filled with vivid images and chilling metaphors. I am looking forward to the next part which continues Vasudevan’s interest in the natural world.

Will the COVID-19 pandemic affect art in 2023? Probably in some way, although we may not fully comprehend its impact in the coming years. In the meantime, I’ll be watching how world events, conversations about race, equality, the environment, and evolving concepts of earth, healing, and justice play out in artists’ work. I’ll also talk about what I consider new and “brilliant,” a word the late Pamela Espeland used to describe her driving force in lighting when she wrote for this column. And all the while, I’ll be sharing my thoughts here on the column pages and in the Artscape newsletter.