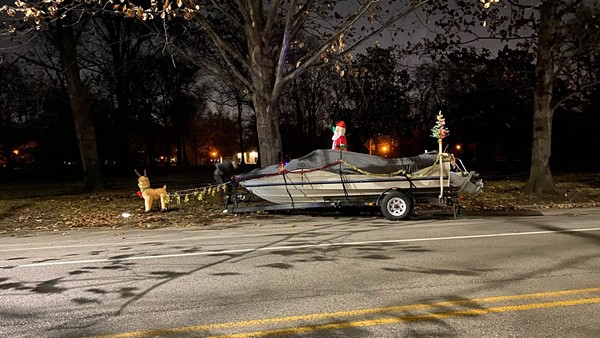 Santa on an abandoned boat in the Arsenal.

Yesterday RFT reported a fleeting miracle on Arsenalnaya Street. Kind neighbors decorated the long-abandoned boat with Santa Claus, a garland and a reindeer.

But just as quickly as the boat brightened and cheered up, it disappeared.

The city towing department told us they didn’t tow it. The police said the same.

Last 24 hours RFT received some Santa’s boat related tips and also got some leads from Facebook. We spent the morning driving around the southern city to the places of alleged sightings of the Santa Claus boat.

Several clues led us to the boats, but the boats turned out to be ordinary, not festive at all. We had read that the first 24 hours were critical if Santa’s boat went missing, so we started to worry.

These are not the boats you are looking for.

We then received an email from a reader who reported that she saw Santa’s boat on Loughborough Avenue yesterday and was so surprised by the sight that she followed her along with her fiancé onto Route 55. From there, she headed for Interstate 270 – and RFTA couple of readers traced it all the way to Fenton.

“He was driven by a dark SUV or truck, I can’t remember exactly because we were just amused by the little Santa figure going crazy in the back,” she wrote. “We even joked that he was seasick from all this movement.”

The couple lost Santa’s boat when it turned right on 141 and headed north. Instead, our informants turned left to shop at Gravois Bluffs.

By the way, another mystery related to the Santa Claus boat was solved yesterday: who took it upon himself to clean up the abandoned boat that has been tormenting the neighbors in Tower Grove South for a long time?

On the area’s Facebook page, the woman posted a photo of herself with the newly decorated boat before it disappeared, writing, “While we were hoping Santa would stick around longer, we had so much fun seeing everyone’s reactions – glad we could lighten the holiday spirit!”

We hope the good people of Fenton (or wherever Santa’s boat ends) are just as grateful.