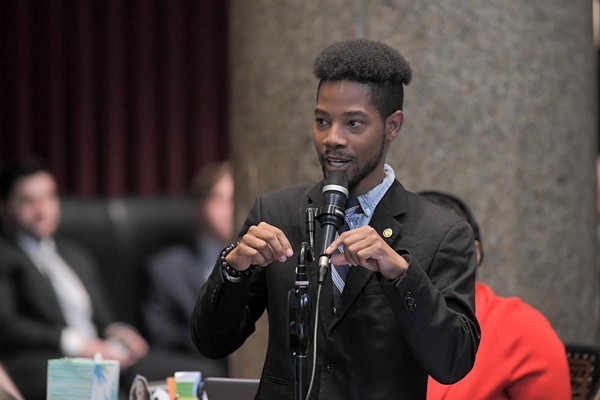 On Thursday, one of the most competitive St. Louis Council of Elders races just got even more competitive.

Democratic Representative Rushin Aldridge Jr. announced this week that he will run for the city’s 14th district.

Aldridge, who was previously a member of the Ferguson Commission, is the state representative for St. Louis’ 78th district, which covers part of the 14th district. He has been in this position since 2019.

He confirmed his candidacy for Alderman on Twitter this morning:

I’m happy to announce my campaign for the post of alderman. #Mighty14th Watch out! It’s time to move St. Louis forward in a fair and people-centered way. If you believe in a better future for every resident of our city, please contribute to today. #TeamShinBin pic.twitter.com/aRj8MMekv6

Aldridge’s announcement sets up a competitive three-way race. His opponents are Ward 3 Alderman Brandon Bosley and Ward 5 Alderman James Page, who are now in the same borough as the city shrinks from 28 to 14 boroughs.

Bosley comes from a family of St. Louis politicians – his father, Freeman Bosley Sr., is the oldest alderman in the city’s history; his brother Freeman Bosley, Jr. was the first black mayor of St. Louis; his mother, Lucinda Fraser, committee member; and his sister, Lakisha Bosley, is a state representative. Bosley has served as alderman since 2017.

Backed by citywide progressives, Page entered the political arena last year with an impressive victory over Tammika Hubbard, who has been in office since 2012. He serves on the board of the St. Louis Urban Neighborhood Association.

Ward 14 has a population of approximately 20,000 and stretches from downtown to northeast St. Louis.

As the application deadline approaches January 6, as of Thursday afternoon, more than 30 people have officially signed up to be an alderman.

In three divisions, including division 14, there will be a battle between the actors. In Ward 3, current Aldermen Bret Narayan will take on Joseph Vaccaro, and in Ward 13, Lisa Middlebrook will face Pam Boyd.