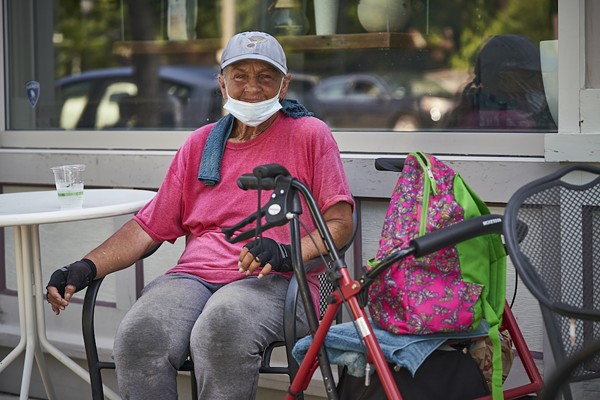 Sharon Branham, known as “Sherri”, was a Culdee regular on the Skinker for many years until her recent death.

Sharon Branham died late last month, apparently of natural causes. A graduate of Lindbergh High School and former secretary of the Brown Shoe Co., Sherry has spent her last decades panhandling on the corner of Forest Park Parkway and Skinker Boulevard. As Branham explained to an RFT reporter this summer, she became homeless after her partner died of liver cancer, but later got an apartment in Metro East after saving money for rent through social security, disability, and what she could earn in corner. She commuted daily to the city on MetroLink.

It was in the city, on her corner and beyond, that Sherry befriended University of Washington graduate student Clark Randall, who eventually organized her memorial. He shared this tribute to her life.

Predictability is a concept that I love more and more as time goes on. For example, how could you predict when my bike would roll down the Skinker to Caldy, and how could I predict that you would be there for 10 minutes by taking the train that arrives at 7:40 in the morning. Finishing his coffee, the third chair on the right faces the window and looks at Skinker. You’d wake up around 4am to be on the corner before 9am, traveling here from the last eastbound stop in Illinois on the subway.

It’s been two weeks since you left. The other day I went to Kaldi; passed Lindell on the Skinker and I felt your absence on that little grassy patch where you’ve been standing all these years, leaning on your worn-out walker, greeting another line of cars pulling up to the traffic lights. It hurt not to see you there. The city seems much smaller than yesterday.

I think that some people exist in cities partly to organize them. Some people have a way of giving meaning to places, giving others a chance to better understand where we live, if we are open to it.

For others, Sherry, I think you were a challenge to their complacency. I saw it on people’s faces when a car pulled up at a red light. They stop, staring ahead, avoiding a moment of recognition, and then the car pulls up a few more feet. This has often been a signal for you to move on; there was nothing to give—not a smile, not a dollar, not a word. You told me about others, often the businessman who rolled down the window and rummaged through his purse with 50s, 20s, and 10s only to apologize for not having a small enough bill to get past you.

Many times when people die, those who remember them go to extremes, noting only the most incredible or unique features of the person they want to honor. I do not agree with this concept of life or death. Sherry, you were a wonderful ordinary person. Your life was hard, but you managed; you loved people and got mad at them too. You were consistent, honest and inspiring. What a failure on our part that we do not see in this the pinnacle of human achievement.

To be honest, I don’t know what we’ve been talking about all these mornings. There was a lot of chatter and wandering thoughts. In our last conversation, the day before your death, you talked about how you would like to have children, but some condition prevented you from having your own at an earlier age. “I would adopt 100 now if I could, if I had the money.” I’ve spent my 20s working in a coffee shop, and I believe small talk is the fabric we all sew the city from. And what I know for sure, Sherry, is that our small talk has kept me entangled several times, after a breakup or another failed exam. I don’t know if you noticed it in me, but I’m sorry I didn’t take the time to tell you. Again, perhaps it has already been understood, the deep interdependence of warm acquaintances.

I miss you already,