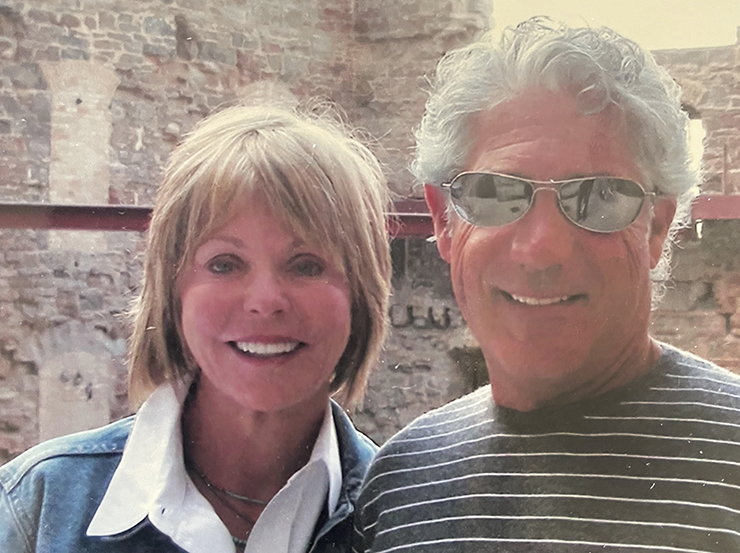 In 2018 when Pat Mileshusband Charles “Bucky” Zimmerman diagnosed pancreatic cancer stage 4the only thing the former TV news anchor could think about was what was happening at the moment.

“All I could do was just put one foot in front of the other,” she said. “There was no room in my brain for anything else.”

Since Zimmerman has been diagnosed with an incurable diagnosis, it would probably make more sense for the couple to sit down and discuss the finer points of his will or the details of their financial affairs. Instead, according to Miles, they were swimming in a sea of ​​overwhelming anxiety.

“We were pretty much in denial,” she recalls. “Although I knew this disease would probably kill him, I didn’t think it would kill him in three months. I hoped for three years. We were in treatment. He was given chemotherapy, but that made him worse.”

Just a few months before his death in 2019 at the age of 72, Zimmerman was a healthy and energetic man. Successful lawyerHe had a will and a plan of inheritance. But years ago, when he asked Miles to meet with their lawyer to go over the details, she hesitated.

Perhaps it was out of fear, but whenever the topic of planning a life without a husband came up, Miles said: “I rolled my eyes. For me, it was worse than pulling a tooth.”

She would also willingly let her husband take over their financial affairs. “Many women leave financial matters to their husbands,” Miles said. “I am to blame for this. Bucky was a lawyer. I thought he would take care of everything.” But after Zimmerman’s death, Miles discovered that their financial foundation was built more on sand than solid rock.

“Turns out he looked like a plumber who didn’t want to fix his own leak,” she said. “We had leaks all over the place.”

The realization that instead of mourning and recovering, she would have to spend the first weeks and months after her husband’s death meeting with probate lawyers and bankers to sort out her financial life made Miles frantically search for useful resources. for the recently widowed.

“I found that there are many supportive books written for widows about the emotional experience of losing a husband or for widowers about losing a wife, but I didn’t find much advice on how to deal with practical, day-to-day issues. “Today’s aspects of it all,” she said.

It was like adding insult to injury. She was shrouded in what she came to call “a dark mist of grief”. It was a time, Miles explained, when “you think you’re going crazy. You are not doing well. You don’t remember anything. You can’t remember the details. You can’t concentrate.” But Miles needed to turn those feelings off and focus on more practical matters: “I was making really big decisions that will have a big impact on me in the future.”

She soon learned that she was not the only widow who had been forced to turn her back on her grief to focus on more practical matters. Too often, according to Miles, couples avoid talking about difficult or painful topics, and that reality can end up making life difficult for the surviving spouse. This realization inspired Miles, in partnership with co-author Suzanne Watson, to write a book that she hoped would help others avoid similar hardships.

To do this, Miles interviewed widows from across the country and summarized their experience and wisdom in “Before All Is Said and Done: Practical Advice on How to Live and Die Well”, a book she would like to have after Zimmerman’s death.

This approach of getting advice from others came naturally to Miles. She could have written a book about her own experience, she says, but she knew she was more interested in hearing the opinions of others. Collecting other people’s stories, Miles said, “that’s what I do. This is what I understand. This is what I’ve been doing all my life. I interviewed people and told them about their stories. It feels natural, which is why I wrote my book that way.”

Way out of the fog

Although Zimmerman died three years ago, Miles said there are days when her grief is still fresh. She explained that it is a lingering emotion: “It changes, but it doesn’t go away. I have come to understand this. When people tell you, “Get over it. It’s getting better.” It’s not very helpful. actually it just works various. I’m not sure grief will ever get better.”

One of the things Miles first noticed after Zimmerman’s death was the feeling of loneliness even on the busiest of days. “I was lucky,” she said. “I have many friends, but when you are a widow, when you get up in the morning, you have no one to talk to, and when you go to bed, you have no one to talk to.” While she was able to fill her days with things to do, the beginning and end of each day felt like a cold reminder: “I always thought I was pretty independent, but being older and single is not a fantasy, I tell you. ” 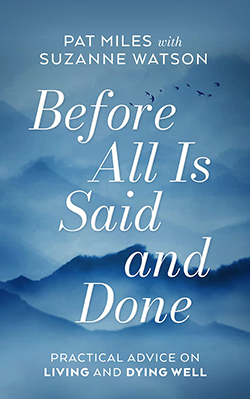 Miles has always felt the need to keep herself occupied, but in the three short months between her husband’s cancer diagnosis and his death, she would like to commit herself to the process. Instead, she occupied her thoughts with fussing around, making appointments with the doctor and arranging for his care.

“It’s an extraordinary time when someone dies,” Miles said. “You try to make it ordinary by doing ordinary things, and you end up missing out on the extraordinary part of the whole process.”

Zimmerman asked her to slow down, but she found it difficult to listen. “I remember Bucky telling me, ‘I need you not to be so busy,'” Miles said. “Now I understand that I was trying to keep myself busy so as not to think about what is happening to us. One of my biggest regrets was that I didn’t know that I should just slow down, accept what was happening and be there.”

While Miles was working on her book, one of the widows she interviewed spoke of how she approached death doulaor a professional trained to help people through the process of dying to support her husband in the last days.

In the final weeks of Zimmerman’s life, one of Miles’ two daughters came to visit them at their home in Arizona. “She pulled me aside and said, ‘Mom, have you thought about talking to the death doula?’ I said, “I don’t know what it is. Go away. I do not want to talk about this”. Later, after talking to other widows who told her about their experiences with death doulas, Miles told her daughter that she wished she had taken her advice.

“She said,” Miles recalled, “I knew you were fighting a war you couldn’t win. Why not ask someone to help you come to some acceptance of what’s going on? Almost more than anything, I would like us to do this. So much is left unsaid and undone.”

Now that her book has been published, Miles, 72, said she’s focused on taking the next steps in her grief journey. Although she knows she will never fully recover from the loss of her beloved husband, she realizes that she now needs to focus on the sudden loss.

“I remember talking to a therapist,” Miles said. “She told me, ‘There are people who, 10 years after losing, are still stuck.’ There are days when I cry, asking myself, “What’s wrong with me?” Sometimes she wonders if all her work has been just another distraction.

“Maybe I really didn’t do it,” she said. “The first year I devoted myself to solving financial problems, and then the next two years to the book. I hope this is my year to sort myself out.”