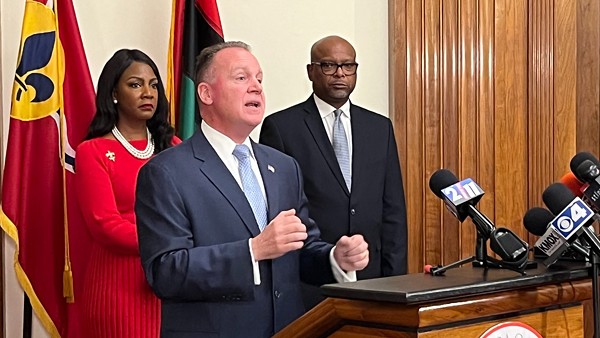 Tracy is currently the police chief of Wilmington, Delaware, a city that Tracy says has gone from “U.S. Murder City” to “change city” during his tenure as chief.

Before becoming police chief of Wilmington, Tracy worked in Chicago as a crime strategist and with the New York City Police Department.

“I will work to give you a police department that meets your needs, an accountable and accessible police force,” Tracy said.

Introducing him, Jones spoke of his “proven track record” of reducing violent crime in cities where he has previously worked. During his time in Delaware, shootings were down 50 percent and crime overall was down 27 percent.

Tracy, who will take command of a department some say is understaffed, recounted his own history of being able to keep officers in the Wilmington department even when they were offered more money to go elsewhere.

Tracy would be the first SLMPD leader to come from outside the ranks, which was also the case in the Wilmington chapter when Tracy took the top job there. Wilmington is a city of just over 70,000 people, most of whom are non-white.

Tracy said he believes most crime in St. Louis is committed by a small number of people and his strategy will not be to “arrest everyone to get those few.”

When asked what he would do about the SLMPD’s contentious relationship with District Attorney Kim Gardner, Tracy said that his outside of St. Louis law enforcement would probably be an advantage.

“Whatever happened in the past, I am not attached to it,” he said.

Earlier this year, the Wilmington City Council passed a vote of no confidence in Tracy over a lack of diversity and transparency in the department.

Tracey said the problem in Wilmington was “very short” and cited the fact that in recent police academy classes in Wilmington, 80 percent were of color.

Tracy said that in the near future he plans to travel to every area of ​​the city, to get acquainted with the communities for which he will be responsible for protecting the order.

“There are many places I could turn to,” he said. “And that’s the only place I’ve been.”