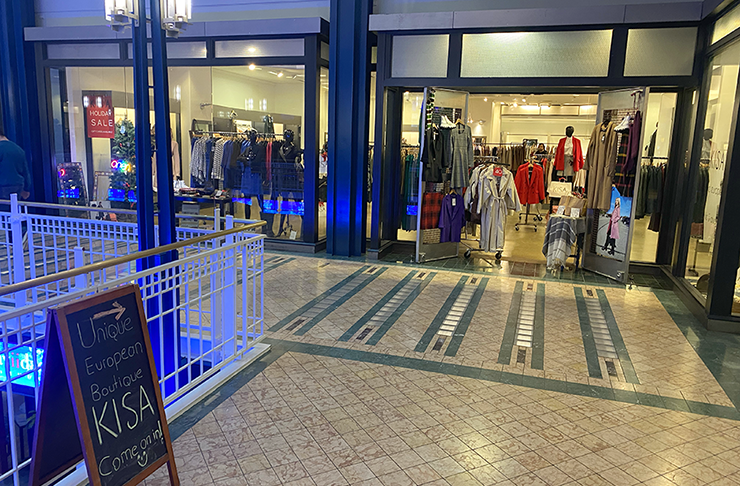 “Downtown is very challenging for businesses,” said Calgar Keesa, co-owner of the KISA boutique, which sits in the heart of the Gaviidae Common (one of many defunct malls) in downtown Minneapolis. His eponymous store was one of the few retail stores open on a weekday, the week before Christmas, and I couldn’t resist selling Turkish scarves. Since there was no one else in the store, we started talking.

“Seven years ago everyone left; there were only department stores around,” Kisa told me, explaining his story. “And now the Marshalls and Saks Fifth are gone too. I’m the last little boutique now. Before COVID, there were hotels and office workers here.”

According to Kisa, the changes in the city center were not only due to COVID. It has already begun, but COVID has exacerbated the problem of downtown retail.

Meanwhile in downtown Saint Paul there was a double murder in the Central Station tower last week. This resulted in the closure of a key link between the Green Line light rail and the city’s elevated crossing system. Once a prime example of the city’s commitment to public space, the steps and elevator are likely to remain closed for months. It’s certainly a wake-up call for the interconnected worlds of transportation, office workers and the economic boom in downtown St. Paul.

Exodus of workers from the city center

Despite the reflex political backlash whenever you mention “downtown”, what links these issues is probably not what you think. Most of the problems in the city center are the result of one fact: a small number of people go there every day. COVID and technological change have wiped out the downtown population that existed just a few years ago. Lacking this critical mass, downtown lacks what urbanist Jane Jacobs simply called “eyes in the street” to solve a whole bunch of social problems.

In my opinion, the only thing that will bring downtown back to its pre-pandemic “normality” is a lot of new housing. Minneapolis should aim to double its downtown population, and St. Paul should aim to at least triple its population. Instead of throwing incentives at short-term security fixes, useless retail or convention jobs, or more stadiums, planners and leaders should focus on building more downtown housing. This is the only real solution to the long-term problems of our most important urban areas.

When you dig into the numbers behind the evacuation of the day-to-day downtown workforce, it’s a little overwhelming. It’s hard to get accurate data because “downtown” means different things to different people. But before COVID, downtown Minneapolis employed about 200,000 people daily and had a population of about 50,000. St. Paul’s population was 50,000 workers and 10,000 residents. In both cases, it was the day-to-day labor force that generated the lion’s share of street life and economic activity.

That’s why COVID has changed everything. Despite upbeat downtown Minneapolis Council reports, longtime proponents of the business who basically run downtown Minneapolis, the workers won’t be coming back. Even if they are, then certainly not every day and not in the same quantities. While the council’s “resuscitation” page suggests that “building occupancy” is close to 60% again, what they don’t mention is that the vast majority of these returning workers are infrequent. Even with small-scale work-from-home (WFH) policies, this still means a 50% reduction in downtown population.

Every bit of anecdotal information I’ve gathered over the past two years suggests that much more lenient approaches are in place in most workplaces. My best guess is that the day-to-day downtown population is a third of their former selves on any given weekday. This is brutal math for small businesses.

And everyday workers are not going to return. Ask people about their nature of work, and for anyone with a choice in the matter, especially white-collar workers with the highest disposable incomes, people rarely come into the office. One manager I talked to about this told me, “Even if I wanted to, I couldn’t get my employees to come. I want to keep them.” With no end in sight to a busy job market, working from home hasn’t gone away. City centers will have to turn around in a big way.

How to tidy up the city center

One key issue is that many generations of downtown planners have focused on this now-missing part of the population: the white-collar workforce. These long-term investments and planning decisions are not easy to change. Much of the social and physical infrastructure in the downtown area, from parking lots to dining areas, bus and freeway networks, and the entire flyover system, was based on the daily movement of commuters in and out of the downtown area. If these ordinary people never return, how should the city center be reoriented?

Without tens of thousands of people returning to the center — not just for events, but every day — our centers are likely to suffer from crime problems and “vacancy” posters hanging in half the windows. Apart from housing, nothing else will help.

Boosters in downtown Minneapolis should probably count themselves lucky because they’ve been adding housing for a decade, and downtown’s residential population has grown by a third in the last ten years. This makes them much more resilient to long term disruptions caused by COVID and WFH technologies.

On the contrary, things are even worse for St. Paul. Its downtown area relies on the public service, where, for various reasons, the human resources department tends to offer the most flexible policies. Acres of government buildings on the northern edge of downtown St. Paul are likely to become everyday ghost towns for a decade to come.

The last Holidazzle and the end of an era

If I had known how good downtown was in 2019, I would have savored it more: relative crowding, dozens of Caribous flyovers, long-running department stores. Today it is far from downtown Minneapolis and St. Paul.

When last Holidazzle parade was held in downtown Minneapolis back in 2013, I went with a group of friends to Nicollet Mall to witness the end of an era. All this obsession with downtown department stores is confusing for millennials, not to mention the whole parade revolving around employees dressed in light bulb suits.

No wonder the retail industry is constantly changing. Especially in the city center, where the car (especially) proved to be poison to the entire business model, maintaining retail has been a multi-generational challenge. Department stores are alive and well in other countries where they are seamlessly integrated with major urban transit stations. Here in the US, with half a century of ridership, how could they keep up with suburban malls and the Internet?

“People in the city center, they have a different mood,” Kisa explained, working the week before Christmas at his European boutique. “It’s depression. They don’t have buying sentiment; they are in a working mood. They are just busy and say: “I need to go home to the children.” I feel like no one can survive downtown in the retail business.”

That won’t change until we get a critical mass of people back to the city. The only way to achieve this is to increase the number of housing, people living in the city center and spending every day in the city center. Until then, the outlook for skyscrapers and downtown shops remains bleak and getting bleaker.