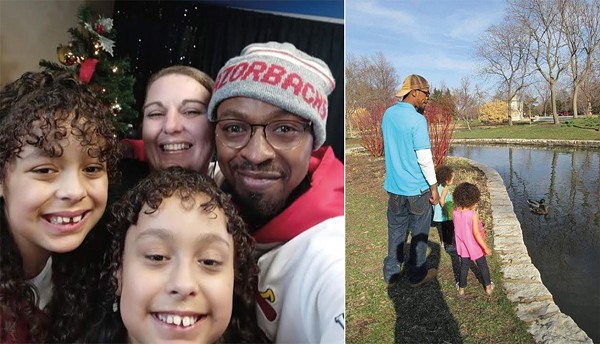 Courtney McNeil (with hat) with her family. He died at the City Justice Center. Details of how he died have not been released.

Courtney McNeil, 41, was determined to give his twin daughters the stability he didn’t get as a child. McNeil’s father passed away when he was young. His mother was on drugs. McNeil met Jennifer Bisbourg in 2006, and five years later, when she gave birth to Faith and Patience, the twin girls became McNeil’s world.

“This is what Kourtney lived every day for,” says Bisbur.

When the girls were born, McNeil worked two jobs at a fast food restaurant. He later earned a certificate in HVAC repair and took a casual job in a call center.

“No matter what it cost, he did everything for us and put us first,” Bisbourg says.

In May 2020, at a gas station in the Hamilton Heights neighborhood of St. Louis, private security guards were filling an ATM machine with cash when one of them placed a bag containing $64,000. The guard turned to pass something to his partner when, according to a probable cause statement, McNeil grabbed the bag and ran.

McNeil stumbled, dropping his wallet and phone. He got into a fight with a security guard over a money bag, and as the two men struggled, McNeil threw as much money as he could into his car. He left with approximately $15,000 but left a wallet containing his ID.

McNeil was later arrested and charged with stealing over $25,000.

McNeil was released on bail this year while living in the Carondelet neighborhood with his family when police picked him up on a court order on the Thursday before Labor Day for failing to appear in court related to ATM theft and two lesser charges related to synthetic drugs. possession of marijuana and paraphernalia.

Five days later, McNeil called Bisbur just before 9 a.m. from the city’s Justice Center to let her know that he could have a trial date that same day, meaning there’s a good chance he’ll be home that evening.

On the same day, Bisbourg received another call from the city jail.

“When I answered, it wasn’t him,” Bisbourg says. “It was some lady. I was his legal next of kin. She called me and said he passed away.”

McNeil’s death was one of at least six that occurred at the city jail between late April and early September. In April, Robert Miller, 50, died less than a week before his trial for kidnapping and sodomy began. In July, Augustus Collier, a 30-year-old man who, according to prison officials, died by suicide, died. The following month, 33-year-old Dennell K. Johnson died in custody. Less than a month later, 48-year-old Donald Henry died on September 3, just three days before McNeil. Every death made headlines when it happened, but perhaps not all prison deaths were reported.

ArchCity Defenders’ Fatal Violence Program reports that at least one other man, who has not been named, has died in prison this year. Lawyers for ArchCity uncovered the death through extensive interviews with inmates and individuals recently released from prison in an effort to better understand the conditions there. They think the death occurred in November as a result of a stabbing incident, but the prison never released anything public about it.

Lawyers for ArchCity Defenders have accused the prison of providing only “blank” responses after these deaths and lack of transparency about how they will be investigated.

The families of at least four dead men have taken it upon themselves to find out how their loved ones died. Their lawyers discovered new information about the circumstances that led to the death of the detainees. Although the process is at an early stage – no legal action has yet been taken – disturbing details are already emerging, and if previous wrongful death lawsuits against the center of justice are any indication, the city could face harsh financial penalties.

Lawyer Bill Meehan is currently working on Bisbur’s behalf to investigate McNeil’s death. Meehan says the forensic report shows that McNeil died from injuries that suggest he was beaten. He received blunt trauma to the torso and lower extremities. The cause of death was a rupture of a stomach ulcer, the injury corresponded to the beatings. Bisbur says that when she was allowed to see McNeil’s body, there was a “big bump” on his forehead that hadn’t been there a week ago.

When asked who might have beaten McNeil, Meehan replies: “We think it was the guards, the correctional officers. But we don’t know.” He filed a request with Sunshine for CCTV footage inside the City Justice Center. “But in a prison where locks don’t work, who knows if video cameras work,” he says.

Meehan says his and other lawyers’ investigations are integral because the prison cannot be trusted with the investigation itself.

“They will make sure the results are what they want,” he says. The prison doesn’t even give details in the federal records.

Since 2014, the Detention Death Reporting Act has encouraged prisons and prisons across the country to report deaths in custody. These reports are submitted to the Missouri Department of Public Safety, which then passes them on to the federal government. Custodian agencies are not required by law to file these reports, but it is often necessary to comply with reporting law in order to receive federal grants.

RFT requested 2022 DICRA reports and found only four submitted by the City Justice Center. (Monte Chambers, program manager for the St. Louis Department of Public Safety, said some are still waiting for information from the medical examiner.)

The report related to McNeil’s death is incredibly sparse, simply saying that McNeal was in jail when he “stopped responding at 10:29 a.m.” and was taken to SSM Health St. Louis University Hospital, where a doctor pronounced him dead. .

The DICRA report on Robert Lee Miller, the man who died two days before his trial began, is only slightly more detailed. The report states that Miller began complaining of chest pains around 00:15. He had breathing problems when he was wheelchair-bound to the jail’s medical block, and “shortly after arrival, the subject collapsed at 00:34.” “, the report says.

This was announced by prosecutor Kevin Young, who is investigating Miller’s death. RFT this is based on what he learned about the circumstances of Miller’s death: “It’s definitely a case. Now I know enough to file a lawsuit.”

Young says the autopsy showed that Miller died of a pulmonary embolism caused by deep vein thrombosis – a blood clot formed in Miller’s veins, likely in his legs or arms, and then traveled to an artery in his lungs, cutting off oxygen. Experts say Miller had symptoms for some time before his death.

“We have reason to believe that Mr. Miller has been exhibiting symptoms that should have been cause for concern for at least several hours, if not longer. And we think the prison just didn’t take him seriously until it was too late, Kevin Young reveals RFT.

Young later emphasized in an email that he was in the early stages of his investigation and was not sure to whom and when Miller complained, but that is exactly what he intends to find out. Young says he plans to talk to Miller’s cellmate at the time of his death. “It will be important,” he says.

It is still too early to know exactly how much the city may have to pay if wrongdoing is found in connection with these deaths. In October, the county jail settled a $1.2 million wrongful death lawsuit. The plaintiff in this case alleged that the prison staff ignored the obvious signs of medical coercion of 31-year-old Daniel Stout leading to his death. In the first week of December, the city of St. Louis settled a lawsuit with the surviving family members of DeJuan Brison, who killed himself hours after being released from the city jail to custody at Jennings Jail. Bryson’s family claimed that the city jail did not alert Jennings Jail that Bryson needed to follow up on the suicide. The amount of the settlement in this case was not disclosed.

Bisbourg says she’s still trying to accept that her 17-year-old partner, the father of her 11-year-old twins, won’t be coming home. This process is complicated by the fact that she does not even know all the circumstances of his death.

“I’m still looking at the door, waiting for him to come in,” she says. “My kids still have school, graduation, graduation. He won’t be here for any of this.”

We welcome advice and feedback. Write to the author at [email protected] or follow Twitter at @RyanWKrull.

This project was completed with the support of a grant from the Ira A. Lipman Center for Journalism and Civil and Human Rights at Columbia University in conjunction with Arnold Ventures.