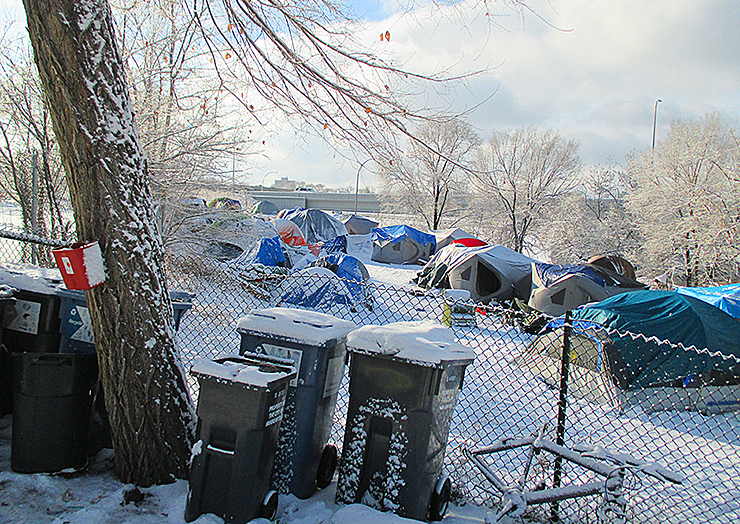 Just yesterday, the Minnesota Department of Transportation cleared a camp under the 35W bridge at 31st Street in Minneapolis. Witnesses said they saw workers move people’s belongings and about 20 propane tanks that people use to heat portable heaters to heat their tents, Southwest Voices. reported.

Temperatures are dropping at a dangerous rate, posing a safety hazard for the homeless. A former law student at the University of Minnesota has a few thoughts on what might help during the cold winter months.

Almost two years ago Daniel Suitor wrote an article for the Minnesota Law Review, which says the state should impose a moratorium on winter evictions to address cold-related death and injury among the homeless population. Suitor remains committed to his stance on the issue and says laws passed during the pandemic, such as a moratorium on evictions due to COVID-19, could improve outcomes.

“It’s gotten really cold and there’s just a lot of evictions in Minnesota right now,” Suitor said. “I think a lot about how I talk all day to people on the HOME line who are being evicted and they say, ‘Where do I go? I have nowhere to go. Cold.'”

There have been 1,340 evictions in Hennepin County so far in 2022, up 234% from last year. With the rise in evictions, more people are seeking temporary shelter. The latest Hennepin County Shelter Report shows 238 families living in shelters as of Dec. 9, up 255% from the same time the previous year.

Minnesota already has some laws in place to keep tenants safe during the winter months. Cold weather rule protects people from constantly turning off their heat source from October 15 to April 15 if they cannot pay their utility bills. The rule prohibits companies from turning off utilities for customers whose household income is 50% or less than the state median income.

But Minnesota isn’t blocking evictions over winter rent arrears. Such a policy could prevent most evictions, Suitor said. in Minneapolis, 93% evictions It’s for non-payment of rent.

“(The vast majority) are just financial problems. Someone loses his job, finds a new job, but he is not paid for a month; they incurred unexpected expenses,” Suitor said. “When I see these evictions for non-payment of rent, they are usually the final stage in a series of disasters for those who have done their best. This should not lead to someone being thrown out into the street in winter.”

So he looked to other neighborhoods to see what cold protection measures were in place and came up with a city ordinance in Seattle that was passed in 2020. While he was writing his article, the ruling was not respected because it was challenged by law.

It is currently applied and protects people with income below the average for the region. from eviction during the period from December 1 to March 1. There are exceptions in the law if the tenant, among other things, is engaged in illegal activities or creates a danger to people in the apartment.

Mortality from cold in numbers

In 2019, 62 people died from a cold in Minnesota. Hennepin and Ramsey counties also have higher rates emergency room visits for colds compared to the state average.

In addition, when comorbidities were included, temperatures below 32°F were found increase the overall risk of death for homeless people by 84%. This risk rises to 321% when temperatures drop below 9°F.

In addition, 90% of their callers are at or below the US Department of Housing and Urban Development’s low income threshold. According to Sweetor, their BIPOC callers report 31% lower earnings than white callers. However, the income gap between BIPOC and white callers has reversed, with BIPOC people who call to evict earn 3% more than white callers to evict.

“These data suggest that while BIPOC and white tenants face eviction at roughly the same percentages under income control, the statistically lower incomes of our BIPOC clients increase the likelihood that they will experience eviction overall,” Suitor wrote.

Throughout the COVID-19 pandemic, a series of federal and state eviction moratoriums have prevented tenants from moving out of their homes. Minnesota has phased out its eviction protection, lifting all eviction restrictions on June 1, 2022.

Tenants and now homeless people and shelters are feeling the effects of the COVID-19 eviction moratorium ending across the state.

“With the end of the eviction moratorium, we have more people accessing shelters and more people sleeping on the street,” said Steve Horsfield, chief executive of Simpson Housing. “The number increased dramatically in the second half of 2022. And we assume that this is the driving force.”

Simpson is one of many organizations that have an emergency shelter. Its staff also helps run the Hennepin County Adult Shelter service, which connects people to the county’s nearly 700 beds.

Between January and October, 5,864 people were in shelters in Hennepin County and 2,981 people in Ramsey County, according to the agency. Minnesota Institute of Public Unions. Across the state, 16,688 people were in emergency shelters during the same period.

There is more demand for Minnesota shelters than beds, Horsfield said. Through the Adult Shelter Connect service, they have had to turn down many people looking for a place to stay.

What can be learned from COVID-19 eviction moratoriums?

While Suitor continues to advocate for a cold-weather eviction moratorium, he doesn’t think it will be passed unless progressive city councilors focus on housing issues.

“It’s a pretty progressive policy, and every time you talk about restricting the rights of homeowners, they have more money than poor tenants who are one salary away from being thrown out on the street, so they have a little more opportunity to lobby the city advice,” Suitor said.

The statewide moratorium on evictions has been upheld on many counts and has been challenged in state and federal courts. He hopes this precedent can pave the way for future moratorium laws.

“The fight for moratoriums on COVID has really paved the legal way to write these laws in such a way that they can be recognized as constitutional,” he said. “We showed people that the government can protect tenants. I think there is now the social will to look back and say, “Well, it worked once.” We probably can’t put a full moratorium on evictions again, but it seems reasonable to me that people would look at how the law could protect them or people they knew and say maybe we could get some of that. during some of them. coldest months of the year.